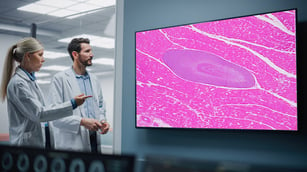 The surgeon is up next, and before too long a bunch of birds appear in the air. The surgeon raises his shotgun and fires wildly into the air, in every direction, and birds start falling from the sky. The surgeon turns to and nudges the pathologist and tells him, “Go over there and see if those are ducks.”

I recently had a couple of opportunities to go prairie dog hunting in South Dakota with a radiologist from the hospital. We had been to the range many times and enjoyed trying to compete with each other for both accuracy and precision. We decided to load up our trucks with several rifles and thousands of rounds of ammo and work on varmint control in the South Dakota plains.

One can learn a lot about a man on the Great Plains without another person or man-made structure for dozens of miles around you. The long hot days hunting and cooler nights getting ready for the next day introduce the opportunity for discussion and reflection. Among many topics, I asked my radiologist to describe a typical day doing diagnostic radiology, particularly since the days of “wet reads”, whiteboards, file storage rooms and hot lamps that were once as commonplace in hospital basements as morgues and histology laboratories. Unbeknownst to me, radiologists routinely perform their work from home. They have diagnostic workstations usually consisting of 4 monitors with the ability to use voice recognition to create reports in their home offices. Mammography can also be performed but given the costs of the monitors, apparently this is a more restricted practice for those dedicated to mammography. Body CT, MRI, and plain films can all be done on lower cost monitors. So, while they are not in the hospital, they are working from home with no loss in productivity or quality and a measurable increase in work-life balance according to some studies my friend referenced and his own experience. Furthermore, folks can work part-time as needed to provide extra coverage at a moment’s notice and even if they move from the area, can read from their new homes in Arizona or Florida while serving patients in Illinois.

The model goes further such that when they are on “vacation”, radiologists routinely work in locum tenens opportunities, or for other non-competing clinics/hospitals/health care systems rather than spend their days at Disneyland or prairie dog hunting.

This has been happening for years. A “retired” radiologist may be reading your radiology study hundreds of miles away, in another time zone, unencumbered by a hospital office and geopolitical forces present in every professional office setting.

While this practice has been discussed in pathology since the first black and white image transmission via satellite and more recently over the past two decades with whole slide imaging, cloud computing, high speed Internet and voice recognition/remote transcription services, it has not reached a significant scale. There are anecdotal examples, just as there are examples of slides being shipped for review out of state to appropriately licensed and credentialed providers.

Every time this discussion comes up in pathology, however, we get bogged down in CLIA, HIPAA, what is a “professional office setting”, security, safety and quality issues that prevent its adoption. The pandemic shed new light on the remote sign-out of pathology cases and offered the opportunity to really look at these issues, as well as safety, security, privacy, and diagnostic fidelity. We have discovered it is safe, and effective and may allow our specialty with the much-needed resources for appropriate coverage for the services needed.

We have a shortage of pathologists right now that no one can remember in the past 30 years. When I was in medical school 30 years ago, the pathologists would come to lecture us and tell us duck hunting jokes, that all the interesting cases in the hospital ended up under the microscope, pathology was a lot of fun, and other physicians weren’t quite sure how you do what you do, but they are glad you are doing it and respect it. You could make a good living in pathology, but don’t do it because there aren’t any jobs. Today, there are more pathology opportunities than pathologists it seems. According to one well respected website that offers job listings, in Q1 of 2013, there were 58 job postings. In Q1 of 2021, the website reported 417 job postings.

It is beyond time we as professionals, a medical specialty, and a community, with our industry partners approach this with the vigor and necessary backstops and precautions required to make this a reality. While I would not compare radiology to pathology or the significance of a radiology read to a pathology read, as a hospital-based, non-direct patient care specialty I think there are many lessons learned here we can glean from as well as potential pitfalls to avoid. Pathologists are considered diagnostic specialists; radiologists are medical imaging specialists. Who better to learn from?

The provider benefits, the hospital benefits and the patient benefits from these technologies that allow us to extend our reach and impact that we have largely limited within the walls of hospitals. Remote radiology used to mean overnight reads from Australia or Spain to keep radiologists from having to read films overnight. Now remote radiology is radiology, perhaps from someone’s home in the same city and the hospital CT or MR scanner, or perhaps time zones away.

With more people living longer with chronic diseases and the necessity for pathology services increasing, given a diminished workforce and aging practicing pathologist workforce, I think these types of models that radiology has adopted are critical to maintain turnaround times from pathology that the market has come to expect. Or we risk becoming like some places where it may take 2 or 3 weeks…