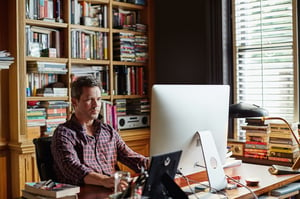 In 1968, a medical clinic at Boston's Logan Airport had a connection with Massachusetts General Hospital to do blood smears using black and white images. As the clinic and the program grew, so did its ability to handle other kinds of images. By the early 1980s, programs worldwide, including Scandinavia, used telepathology frequently in harsh and remote climates for the purposes of performing frozen sections. With the use of email throughout the early 90s, the development of robotic viewing technologies and subsequently, full slide imaging on a larger commercial scale by the late 90s and into this millennium, the ability for pathologists to view remote images has, like many things in our society, become faster, cheaper, and more accurate with widespread high-speed communications, improved processing power, and computer technologies.

Nearly since its inception, the actual business and clinical implementation of remote pathology practices, whether for remote frozen sections or high-volume, high throughput anatomic pathology laboratories, have been mired in numerous regulatory, legal, and intellectual property. While the technology has been shown in study after study that the images were likely as good as (if not better than) images seen through one's microscope, doubts remained among pathologists worldwide whether the technology was safe to use.

These concerns were appropriate and over time, first with the FDA approval in 2017, full slide imaging has increasingly become recognized as a safe and effective tool in our tool box for diagnostic purposes in the care of our patients. Before 2017, and in part since, the business matters and other regulatory issues have effectively made it very restrictive with numerous barriers to adoption. In fact, numerous talks are given each year, at surgical pathology and pathology informatics meetings alike, regarding "obstacles to use". Institutions and programs that have started digital pathology programs talk about how they addressed their use cases, the technologies used for those use cases, the problems they were trying to solve and, perhaps, the problems created in the course of solving the first ones. However, many issues still remained regarding medicolegal issues, perhaps not within integrated healthcare delivery systems per se, but across organizations, state lines, and country borders.

More recently, in light of the Covid-19 pandemic, numerous changes to not only our personal and social lives have taken place, but also significant changes in the world of telehealth (formerly telemedicine) as it is viewed in terms of risk / reward by Centers for Medicare Services (CMS), Food and Drug Administration, and our professional societies and colleges. In fact, nearly 50 years of red tape, legal issues and lack of reimbursement were addressed by CMS to allow pathologists the remote viewing of pathology images from home offices for purposes of providing care to patients while minimizing exposure on hospitals and sheltering in place.

An analogy that has been used in digital pathology for many years is that we have these fantastic Ferraris but can only go 30 miles an hour. The Ferraris are now going 180 miles an hour. This isn't because the roads are less crowded, but is a function of meeting demands during unusual times using technologies that have been used for many years but with legal, regulatory and use issues. Late last month, the College of American Pathologists, the Society of Clinical Pathology, the American Hospital Association, the American Medical Association, and others advocated for these technologies to be used by pathologists at a distance. The advocates cited an aging population within the pathology world who could still perform their work without risking their own health as well as an increasing demand for pathology and laboratory testing services which would require essential personnel to be able to perform their jobs. The guidance document from the College of American Pathologists cites: "Over-burdening remaining pathologists with excess work due to staffing shortages, thereby increasing the risk of burnout, medical error, and further shortages in staffing due to exposure" are potential risks of not allowing remote read-outs. A longer-term risk was cited as "denying remote access to expert pathologists to provide patients with the most accurate diagnosis may have serious repercussions long after the current crisis subsites." In closing, the document cites "pathology and laboratory medicine departments in the United States have the infrastructure for remote sign-out. This includes, but is not limited to, the use of validated digital pathology systems …"

Clearly, this is exciting news for the digital pathology industry which collectively has spent the better part of two decades in an organized fashion, first with the American Telemedicine Association and subsequently with the Digital Pathology Association to make these technologies available to our patients. Arguably, the adoption curve for digital pathology has been right-shifted with a reduced slope, in large part due to the issues mentioned previously. We feel that it is critical, during this public health crisis, to do everything and anything we can to continue to support our patients, our practices, our hospitals, and our healthcare networks. The recognition of being able to use validated and self-validated digital pathology technologies for primary care is beneficial for both industry and users.

As we look to the months ahead, with a growing recognition that soon, perhaps a fraction of us, can sit at Fenway, eating a Fenway Frank, 6 feet apart as life "returns to normal", we should take this opportunity as both industry and users to steward this change and ensure that best practices are utilized for today and tomorrow. This is an opportunity during very different times to herald real change within our specialty doing the work that we love to do and the industry supporting the change needed to do this work.

It is incumbent upon all of us that these technologies are used with appropriate validation, guidelines, and quality assurance measures to ensure the highest quality of patient care from a technical and professional perspective. As we all deal with the situation before us, this is an excellent opportunity to put our best foot forward in these incredible times.