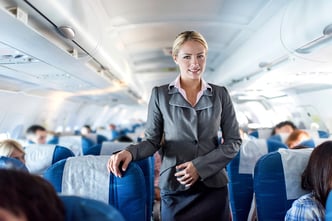 The announcement did not as much awaken as startle me. I don’t think I was sleeping as I caught every word, “Are there any medical personnel on board?”

Nothing good happens at 4 o’clock in the morning at 35,000 feet, with the exception of a live birth.

My first thought was – who are medical personnel? Hospitals and healthcare organizations now generally refer to physicians as “healthcare providers” or “mid-level providers,” and physician assistants and LPNs as “physician extenders.” I assumed they meant they needed a physician somewhere over Kansas.

Cautiously, I looked around in the dark to see if anyone had lit their call bell or was raising their hand.

My second thought was remembering reading about this very thing on Medscape just a week or two before our early wake up call over Kansas. As the story made clear, it is a complicated issue. What if you are a pediatric endocrinologist or if you have had a cocktail or two, or “if not you, then who?” type questions were explored. What about Good Samaritan laws? Would you be covered?

It turns out this happens with a fairly low frequency, given the billions of passengers over billions and billions of miles traveled, but does occur in some measurable amount. In fact, a physician returning from her honeymoon, on a flight from China to Los Angeles, was called upon to deliver a baby just a few weeks ago, as reported in The New York Times.

By now the lights in the cabin had come on and there was a commotion about a dozen rows behind me. Someone was lying in the aisle with two people over him or her.

This is actually the third time I have found myself in a similar situation. The first was when I was in medical school. That time, I figured I could safely not respond, as a first-year medical student is expert in little more than biochemistry, gross anatomy and rudimentary physical examination. We wouldn't even get to syncope, chest pain or automatic defibrillators until later.

The second time I was traveling with someone from the Mayo Clinic who happened to be a cardiologist. He responded to the call and we didn’t have to land, prior to reaching our final destination in Chicago.

I didn’t recognize any cardiologists on this flight while we were boarding, but I knew I couldn’t use the med school excuse either.

First, do no harm.

When the aisle was clear I approached one of the flight attendants and started to tell her “I am a physician, but …” and before I could get out the words “I practice pathology” she reassured me that a cardiologist and a nurse were attending to the passenger and they did not need any more volunteers. Perfect. Apparently it was a minor condition that could be dealt with on board, and the pilot landed the plane in Boston rather than Kansas.

Here’s hoping that either no one needs a doctor or there is a doctor on board the next time the need arises.